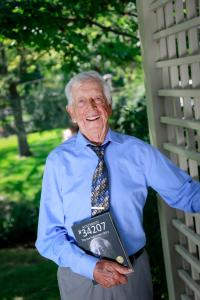 Joe Rubinstein holding a copy of the book about his life: Auschwitz #34207 The Joe Rubinstein Story (photo by Crystal Merrill 2019) 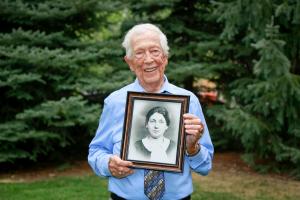 “Love Life. Love God. Love each other. That’s all there is.”— Joe Rubinstein

I cannot imagine a world without Joe, but thankfully his life, legacy, and lessons will live on through the example he set for us all. Joe gave us an inspirational map on how to deal with adversity.”

Icek Jakub Rubinsztejn ”Joe Rubinstein” was born on September 16, 1920 in Radom, Poland. After Germany invaded Poland, Joe and his family were sent to the Radom Ghetto in 1941.

Two weeks later, Joe was taken from the ghetto and sent to several concentration camps. Joe never saw his family again. His widowed mother, Reska, his older brother, Dawid, Joe’s identical twin, Chaim, his younger brother, Abram, and younger sister, Laja, were all believed murdered at the Treblinka Death camp following the “liquidation” of the Radom Ghetto in 1942.

“It is my deepest prayer,” said Nancy Sprowell Geise, author of the award-winning book about his life, Auschwitz #34207 – The Joe Rubinstein Story, “that at this moment Joe is in the loving embrace of his beloved family. Although he survived decades without them, they never were far from his thoughts and heart. Even at the age of 101, Joe could not speak of them without weeping.”

Throughout his life, Joe defied the odds. He went on, not only to survive several of the most notorious Nazi concentration camps, including over two years at Auschwitz/Birkenau, but to live a long, productive, and joy-filled life. Joe and his bride, Irene, moved to the United States in 1949. Joe would become one of New York City’s leading shoe designers, working for such iconic companies as Korkease Shoes, Herbert Levine Shoes, Nina Shoes, Gelbrow Shoes, and later in California for Sbicca of California and Cherokee of California.

Joe’s philosophy of living so long: “Eat right, exercise every day and help each other. That’s what I did.”

Geise said, “For nearly 70 years Joe never told anyone about his story because he did not think anything good could come of it. After the book about his life was published, Joe was deeply touched by the many letters and feedback he got from people around the world telling him that if he found a way to live a joy-filled life after losing all he did, then they knew they could find a way to face their troubles.”

Geise is grateful that Joe finally decided to tell his story so that his family of origin will never be forgotten. “He became a voice for many who perished in the Holocaust and did not live to share their stories.”

“He was an inspiration to so many,” Geise said. “He will continue to be an inspiration for future generations about not giving in to despair and not turning to darkness. Instead, Joe saw the best in people. He lived into the idea of how we each have a choice in how we respond to adversity. Joe chose joy.”

Joe is survived by his wife, Irene, of 74 years, a son, daughter-in-law, three grandchildren, and four great-grandchildren.

On his 100th birthday, the City of Fort Collins, Colorado, declared the day “Joe Rubinstein Day.”

Geise said, “Joe told me in one of the last conversations I had with him, that every day he thanks God that he is alive, but that he is ready when God calls him home. Joe loved to remind people that life is precious and that we should never give up on it. I am grateful that he never did.”

Holocaust survivor shares his philosophy of life at 101. Video from September 2021


EIN Presswire’s priority is source transparency. We do not allow opaque clients, and our editors try to be careful about weeding out false and misleading content.
As a user, if you see something we have missed, please do bring it to our attention. Your help is welcome. EIN Presswire, Everyone’s Internet News Presswire

,
tries to define some of the boundaries that are reasonable in today’s world. Please see our
Editorial Guidelines
for more information.

More from BeautyMore posts in Beauty »